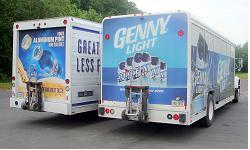 A lawsuit filed last month seeks damages from several beer manufacturers in what is alleged to be negligent sales of alcoholic beverages, mainly beer, to native Americans. The suit claims that distributers for Anheuser-Busch, Miller, Molson Coors and Pabst knowingly provided beer to licensed sellers in Nebraska, where they were then sold to, and smuggled by, Indians back onto the South Dakota Pine Ridge Indian Reservation.

The lawsuit seeks damages for the resulting effects of the smuggled beer, citing increased rates of health care and social services. Alcohol is banned by the Oglala Sioux on the reservation.

The Indian territory stretches across the border of Nebraska and South Dakota, but the stores in question are in Nebraska. The small town of Whiteclay has less than 20 residents but the stores there sold more than 200 thousand cases of beer in 2010. The tribe claims that beer was sold to its members.

It is legal to sell alcoholic beverages to anyone over 21 in Nebraska, and arguably, it would violate civil rights laws to deny sales to Native Americans. However, if the lawsuit is successful, the businesses involved, along with the beer companies, would be responsible for the results of the sales.

Tribal leaders point out that there isn’t any place in the small town, where the beer is sold, to legally consume the beverages. They allege that retailers knew exactly what was happening, and despite being asked by the tribe, refused to stop.

Other interested parties will be closely watching how this case develops. It parallels what happened with tobacco and legal battles for the consequences of legal use. The question is whether or not manufacturers and retailers are contributing to the known damage that alcohol consumption causes. An article in the Huffington Post about the case says, “One in four children born on the reservation suffer from fetal alcohol syndrome or fetal alcohol spectrum disorder, and the average life expectancy is estimated between 45 and 52 years.”