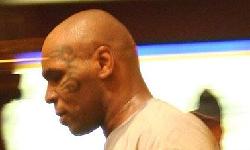 In a couple of revealing confessions, former heavyweight boxing champion “Iron” Mike Tyson, confessed that he’s still battling his alcohol addiction, despite earlier reports of success in rehab. In an interview with TODAY show’s Matt Lauer, Tyson admitted he was just 12 days sober.

The 47-year-old Tyson is making a comeback in boxing, not as a fighter, but a fight promoter. He only recently started talking about his current status with alcohol in a August 23rd interview on ESPN. With two revealing interviews, we now know Tyson believes alcoholism may kill him if he can’t manage to stay sober, and that he’s trying to make amends for the problems alcohol has caused in his past.

According to the ex-boxer, his drinking was directly responsible for his anger issues. Tyson has always had a reputation for being a violent person – an attribute that helped make him a feared opponent in the boxing ring. But he’s also gained a reputation as being out of control outside of the ring, and he’s served time in prison because of it.

“I’m on the verge of dying because I’m a vicious alcoholic,” Tyson said at the ESPN press conference. “I’ve been lying to everybody else that thinks I was sober, but I’m not.”

Tyson also made what might be a surprising revelation to those unacquainted with the power of an alcohol addiction. As one of the most physically imposing athletes ever, a man who seemed to be without fear, it’s worth hearing how difficult he finds this fight to be: “It’s a real challenge because … I don’t know if I like this sober guy,” Tyson said, “It’s hard for me to live normal. Straight is hard. Livin’ straight life is hard.”

Any alcoholic or addict in recovery can echo that sentiment. Livin’ straight life is hard. But they’d add a follow-up. It’s hard, but it’s worth the struggle. Let’s hope Tyson can find his way to learning this second part and win the most important fight of his life.