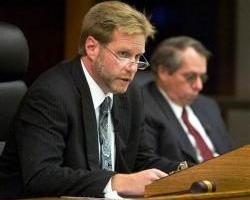 The mayor of a Wisconsin city who went on a three-day alcohol binge that included a bar fight is refusing calls for his resignation.

Milwaukee TV station WTMJ reports that Sheboygan Mayor Bob Ryan is a self-described alcoholic who admits he went on a bender one weekend late in July.

He told radio station WHBL, “I consequently went out for dinner on a Friday, began drinking and it began a three-day drinking session. I’m not proud of it. That’s not me, but that’s the alcoholic within me.”

The Sheboygan City Council wants him to step down, voting 14-2 on Monday to make it official. Ryan told the counsel, “I will respectfully decline.”

“I do not blame the council for asking for my resignation. What I did is indefensible. I’m not proud of it. I’m an alcoholic,” he told the radio station.

Ryan said alcohol has had no effect on his professional life.

“I have never walked into a city meeting or council meeting under the influence of alcohol. Alcohol has never affected the way I do my job. Alcohol has affected my personal life greatly,” said Ryan.

Ryan said he is dealing with his demons.

“I work every day on it. I do go to group meetings. I have been through treatment. I do meet with doctors. I do meet with psychologists. I will continue to do so. I am going into an intensive outpatient program which will allow me to work on my issues more readily and still continue on my job. That will be an evening and weekend group session, and I will still be able to carry on my duties as mayor.”