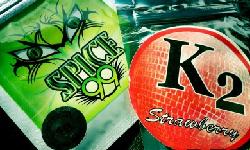 The North Dakota State Board of Pharmacy issued an emergency ruling to ban whole classes of compounds sold as synthetic drugs after the deaths of two teenagers. The drugs blamed for the overdoses had been legal in the state, where critics have argued was slow to crack down on chemicals sold to mimic the effects of marijuana.

The ruling came after testimony from Debra Bjerk, the mother of one of the teens killed. Her son, Christian, died after taking a synthetic at a Grand Forks party.

What’s surprising about the emergency ruling is the sheer number of compounds that fall under the class of synthetics with properties that make them attractive to those looking for a risky, but legal high. There are close to a hundred compounds listed along with some examples of brand names: White Rabbit, Orgazmo, New Dimension, Bizarro, Bayou Blaster, 100% Pure Evil, Sky Pilot Organic Sachet, Hayze, Pure, Demon, and Avalanche.

With so many possible chemicals to select from, it’s plain that manufacturers have no shortage of possibilities. When one is banned, they can switch to another. How effective it will be to ban entire classes remains to be seen.

Many of the synthetics banned in this latest ruling are still legal in other states. And all it takes for a business to get into the synthetics business is a bit of knowledge and the will to do so. The base product is a kind of potpourri that active ingredients are sprayed on. The actual drug is imported legally from overseas. Combining the two in a pretty package is all that’s required. The practice is perfectly legal until the active ingredient is banned.

Meanwhile, in other areas of North Dakota, methamphetamine use is on the rise. There’s been an influx of oil field workers and a booming economy. These are young men with plenty of money, separated from their families and bored. A perfect storm for a drug epidemic.