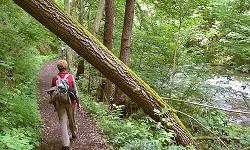 A pair of teens who were lost in the forests of California this month may have to pay the cost to find them because they used drugs as part of the outing. The pair, Nicholas Cendoya and Kyndall Jack, were hiking in Orange County’s Cleveland National Forrest and became lost. Cendoya was found after a three-day search, while Jack remained missing for another four days.

Methamphetamine was found in the car the pair parked before beginning the hike and the supposition is that they shared the drug during the hike. Because methamphetamine can cause confusion and erratic behavior, using the drug may have contributed to the pair becoming lost in the first place.

Because Cendoya owns the vehicle, charges were filed for methamphetamine possession and he will have to appear in court later this month. When the pair were rescued, both were dehydrated and Jack reported having hallucinations of being attacked by small animals. Neither could recall how they had become separated from each other.

“They didn’t go out there to hike, they went out there to get high. And they got disoriented,” Orange County board supervisor Todd Spitzer told the Los Angeles Times.

It is becoming more common to bill those rescued when it is determined their actions caused the incident, either because of negligence or intent. The estimated bill in this case is $160,000, but that represents the total cost. If only Cendoya has to pay (because of the meth charge against him), it would be substantially lessened because he was lost less than half the time that Jack was.

If they do have to pay some or all of the rescue bill, it’s still a better outcome than might have occurred. Others who have taken methamphetamine and wandered to their deaths have been in the news. This past February, a young woman in Lake Tahoe, left a festival at night and was found frozen to death in a snow bank. The autopsy revealed a “fairly high level of methamphetamine” in her system although the cause of death was hypothermia.