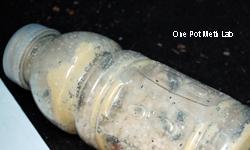 One of the most common themes at AA and NA meetings is when a member tells about their “rock bottom.” That’s the point at which it became obvious to them they really were an addict and really did need help. For many it involved jail or the loss of their health and relationships – sometimes it’s a combination. Whatever it turns out to be, it’s the point where they can no longer sustain the denial needed to keep using or drinking.

Sometimes, a news story hits that is so outrageous it just has to be that person’s rock bottom. You can’t imagine things getting much worse. That’s the impression you get with the following story that appeared on Yahoo News.

A woman in Missouri was arrested at a Wal-Mart when police found a one-pot meth bottle in her purse. And she was making it while shopping. That’s right – the explosive concoction was cooking away, making methamphetamine, while the woman was in the store.

This bit of shenanigans was discovered because she had already been stopped as a suspected shoplifter. It wasn’t until police arrived and searched her purse that the one-pot was discovered. The mixture, known to be extremely flammable and to give off toxic fumes, led to the immediate evacuation of the store.

Addiction sometimes makes you do stupid things, even dangerous things, with meth addiction particularly bad. Hopefully, this was her rock bottom. After all, who in their right mind would wander around Wal-Mart for shop shoplifting, with what is essentially a ticking time bomb in her purse? The message here, and the message she should get, is that thinking this kind of behavior is normal is a serious wake-up call.

No one was injured this time. With any luck, she’ll do some time, get some treatment and show up at an NA meeting with a bizarre story to tell about her own rock bottom – that time she got a Wal-Mart evacuated because of the meth lab in her purse.