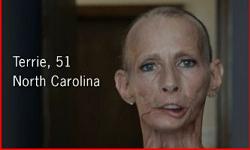 The Center for Disease Control has upped the ante for anti-smoking public service announcements (PSAs). By showing the graphic (and disturbing) results that come from smoking, the hope is that the shock value will translate into a behavior change.

The new spots (which can be seen here) show what life is like with a tracheotomy. They are set up as advice for those who will eventually need the hole in their throat – a common operation used to remove cancer from smoking. Others feature amputations.

The ads do not shy away from the graphic details of life “as a former smoker.” They rely on facts instead of hyped warnings. And the facts are not very pleasant. When Terrie, featured in one spot, talks about getting ready in the morning, she covers putting false teeth in, a wig on and a device into her tracheotomy that allows her to speak. “And now you’re ready to start your day,” she says.

The real question is how much the PSAs will change behavior. That is the bottom line. Unfortunately, it has been shown that PSAs hold their power only for a short time after people view them. The advantage is to cigarettes, because the cravings hit repeatedly, every twenty minutes or so. The PSAs only air a few times. In the wrestling ring of behavioral influence, it’s the stimulus that hits most often that wins the day.

Still, there may be a solid result among those who haven’t yet become addicted to the brown weed. The spots are running during Intervention, a show about getting addicts to agree to treatment. This is good targeting, as the audience is already primed for thinking about addictive substances and the consequences of addiction.

In the end, the spots come off as more heroic than tragic. The people presented don’t seem enough like failures. They seem stoic and resolved to make the best of their situations. The graphic element, so often used in PSAs about meth use, is there, but the spots are about functioning people, not a series of mug shots and failed lives. The real power comes from the simple truth of smoking addiction and the place it leads to.