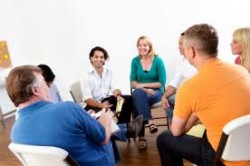 12 step programs hold meetings that act as support groups for the members.

If you are considering addiction treatment for yourself or a friend and are thinking about the possibility of utilizing a 12 step program, read these quick facts in order to familiarize yourself more with the treatment type itself and learn more about why the 12 step program is so popular.

What is the 12 Step Program?

The 12 step program is a treatment that is guided by the use of the 12 step process to help patients eventually recover from abuse of alcohol or drugs or a problematic behavior (gambling, compulsive shopping, etc.)

Where Did the 12 Step Program Originate?

According to DMHS, “Alcoholics Anonymous and the 12 steps began in June of 1935, during the Great Depression.” A man named Bill Wilson was detoxing in a drug rehab center in Manhattan and “founded the organization after discovering his Higher Power.” Wilson “had no formal medical or psychology training; instead the 12 steps were created by combining ideas from philosophy and religion.”

What are the Principles the 12 Step Program is Based on?

The 12 step program is based on the concepts of:

The DMHS and the NCBI websites both list the full 12 steps as they appear most recently in the handbooks given to individuals in these programs.

What is the Original 12 Step Treatment?

Originally, the 12 step treatment was created to help alcoholics, but over time, it has been modified to help drug abusers, addicts of certain behaviors, and other individuals. According to the DMHS, “Roughly twenty percent of twelve-step programs help those struggling with addiction. The other eighty percent deal with a variety of issues from mental health to debt.”

What are the 12 Traditions?

Does the 12 Step Program Need to Be Religious?

Yes. In most instances, these programs which are based on the 12 steps and the 12 traditions carry the concept of a God or Higher Power in order to treat individuals with addictions. While this can be very helpful to some, it may not be as helpful to others.

Are There Similar Programs which are Not Religious in Nature?

Yes. For example, Secular Organizations for Sobriety (or SOS) is extremely beneficial to those individuals who do not wish to attend treatment with a religiously-based program but still like the concept of a mutual-help group program. There are other types of programs for different addictions that are not based on the religious, 12 step process, but these are different from 12 step programs.

What is the Most Popular 12 Step Program?

AA, or Alcoholics Anonymous, is the largest and most popular 12 step program. “The next largest group is Narcotics Anonymous (NA)” (DMHS). According to the NIAAA, “Although AA has the largest following, groups catering to populations with different demographics and preferences (e.g., women and younger people) also can be found.” Not all of these programs are 12 step programs, but they are mutual-help groups.

What is a Mutual-help Group (MHG)?

“MHGs are groups of two or more people who share a problem and come together to provide problem-specific help and support to one another.” While not all MHGs are 12 step-based, most 12 step programs are mutual-help groups. The power of the group mentality as well as the benefit of having a sponsor or another individual who has been sober for a longer time to look up to is incredibly helpful to addicted individuals.

What are the Common 12 Step Groups?

While AA and NA have already been mentioned, there are several other popular 12 step groups that help treat different disorders or addictions. Some of these are:

Not usually. Most 12 step programs and meetings are free to individuals who need help which can be extremely beneficial to those with addictions. In many cases, addicts spend their money on their addictions to the point where they experience extreme financial problems. A treatment program like this one can be very helpful for those who may not otherwise be able to afford treatment.

Is a 12 Step Program Right for Me?

No one treatment is effective for every individual. What may be effective for one person may not be for another and vice-versa. If you are an addict or are considering joining a 12 step program, think about your needs and whether or not a type of program like this will meet them.

After you decide that a 12 step program may be for you, attend a few meetings. If you do not feel that your needs are being fulfilled by the program, consider a different type of treatment. However, if it is the right treatment, it will feel right, comfortable, and effective.