Is Fear Preventing You From Getting Sober?

Feelings of fear can be a powerful motivator, directing a person’s actions on both conscious and unconscious levels. Both drinkers and non-drinkers alike encounter fear at some point in their lives. While each person can choose how to react to this emotion, people struggling with drinking problems have the damaging effects of alcohol to contend with as well.

It’s not uncommon for fear to sabotage a person’s desire to get sober. In effect, feelings of fear become part of the addiction mechanism that keeps a person drinking. Gaining an understanding of how alcohol warps your overall outlook and seeing fear for what it is may help you take the necessary steps to getting sober.

The Effects of Alcohol on the Brain

Alcohol has a cumulative effect in the brain causing widespread deterioration of neurotransmitter-producing cells. These interactions form the basis for physical dependency to develop.

Alcohol works by stimulating GABA, dopamine and serotonin production while inhibiting glutamate-producing cells, according to the Scripps Research Institute. These effects combined produce the feelings of euphoria and relaxation drinkers experience.

Over time, overworked cells deteriorate making them unable to produce needed neurotransmitter supplies. In the process, brain chemical imbalances form and worsen with continued drinking. These developments pave the way for alcoholism or alcohol addiction to take root.

Unlike the physical dependency that develops out of excess drinking, the addiction aspect of alcoholism stems from the damaging effects had to the brain reward pathway. This brain center regulates learning and memory processes in terms of the experiences a person has from day to day.

The brain reward pathway places high importance on positive reinforcing experiences and uses this information to form the mind’s priorities, belief systems and motivations. In effect, the information gathered by this system determines what a person pays attention to and invests his or her energy into within any given day.

The brain reward pathway also depends on a certain balance of neurotransmitter chemicals to function normally, most especially dopamine. With excess, long-term drinking, the chemical imbalances that form essentially warp the brain reward system, and in the process create a psychological dependency on alcohol’s effects, according to the National Institute on Drug Abuse. Much of the fear associated with getting sober stems from alcohol’s long-term effects on the brain reward pathway. 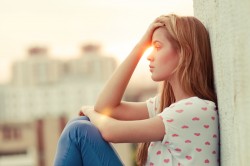 You may not know how to manage stress without alcohol.

As a common motivator for continued drinking, stress factors interact with the same areas of the brain as alcohol and other addictive substances, triggering the release stress-specific hormones and neurotransmitters. After so many hours or days of stress, the brain will naturally takes steps to restore some form of equilibrium.

Alcohol’s ability to depress or slow down chemical processes helps to reduce stress levels, but also adds to the state of chemical imbalance in the brain. Ultimately, stress and drinking form one of the many vicious cycles that keeps a person drinking. Not surprisingly, stress also plays an active role in preventing you from getting sober.

“What about My Friends?”

During the course of a developing alcohol addiction, a person’s priorities change and so does his or her overall lifestyle. Drinking buddies and favorite “haunts” or bars all become part of a lifestyle that’s designed to support continued drinking. This lifestyle takes shape over time as alcohol’s effects cause continued damage to the brain’s reward pathway.

Once you enter treatment, you’ll make the type of friends that “fit into” a sober lifestyle, people capable of supporting your recovery efforts. The bottom line is there’s little chance of you getting and staying sober in the company of “fellow drinkers.”

The psychological dependence that comes with alcoholism takes over a person’s motivations and interests, and assigns alcohol’s effects as the sole source of enjoyment in his or her life. So, someone who once enjoyed golfing or spending time with family will gradually disconnect from these activities to spend more time drinking.

Once a person enters recovery, a big part of the treatment process entails re-learning how to enjoy other things in the place of alcohol. Treatment interventions used in this respect include:

“I’ll Be Less Interesting or Maybe Even Dull”

Alcoholism’s effects on the brain reward pathway essentially warp a person’s psychological make-up and strips away his or her sense of self and identity. The ability to relax and socialize with people while under the influence only lasts for so long before the less “personable” effects of alcohol start to take over, including:

Getting sober will enable you to connect with your individuality in terms of what makes you unique and interesting and form genuine relationships with others.

Anyone living with alcoholism well knows how uncomfortable hangovers can be. Hangovers are actually the withdrawal symptoms that develop as alcohol’s effects wear off. When actively drinking, a person will simply start drinking again in order to recover from a hangover.

The fear of going through a full-blown withdrawal episode is one of the biggest reasons alcoholics avoid getting sober. In order to counteract withdrawal, alcohol detox treatment programs administer medication therapies that work to relieve uncomfortable withdrawal symptoms. In turn, once a person completes detox, the body’s physical dependency on alcohol no longer exists.

“Drinking Keeps Me from Feeling Sad and Discouraged”

For some people, the fear of getting sober may actually stem from an underlying psychological disorder that developed during the course of drinking or existed before they started drinking. According to the National Institute on Alcohol Abuse & Addiction, co-occurring addiction and psychological disorder occurs in a large percentage of drinkers. Getting treatment for an underlying psychological problem can go a long way towards alleviating any fear you have of getting sober.

It helps to keep in mind that any fears you may have about getting sober are rooted within the addiction itself in one way or another. As you take steps to overcome alcohol addiction, any associated fears will subside considerably.

If you or someone you know wants to get sober but harbors fear over what the treatment recovery process entails, please feel free to call our toll-free helpline at 800-895-1695 to speak with one of our phone counselors.