What Can I Learn from the 12 Steps of Alcoholics Anonymous

Alcohol use disorder (AUD) affects approximately 16.3 million adults in America.  Over 600,000 adolescents have been identified as drinking to excess.  Further, over 88,000 deaths globally have contributed directly to alcohol abuse.  The statistics are clear.  Alcohol is a problem for many.

In the 1930’s one man ventured unwittingly upon a desperate quest to stop drinking.  On his journey to wellness, the program of Alcoholics Anonymous was founded.

Background on the Origin of the 12 Steps

Bill Wilson, AA’s co-founder, was told about a set of spiritual principles from a reformed drinking buddy involved in a religious organization called the Oxford Group.  Bill’s interaction with his former drinking companion helped him understand the power of one alcoholic helping another.  While traveling on business, Bill was struck with a craving to drink.  To combat this craving, he made a series of phone calls leading to contact with Bob Smith, AA’s other co-founder.  After this meeting, both men stayed sober and together helped others to adopt a new way of living.  Together, 100 men and women developed the 12 steps based on the original principles from the Oxford Group.

The 12 steps are a set of guidelines that have been helpful to millions of people world-wide in achieving recovery from alcoholism.  These steps have been adopted by a host of other organizations and proved helpful to many in overcoming bad habits, obsessions and compulsions in varying areas.  They are based on the principles of honesty, purity, unselfishness and love.  Taking the steps requires acting upon the suggestions outlined. 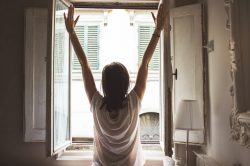 The 12 steps help you develop a new, healthier way of life.

Alcohol use disorder is characterized by denial and an inability to see things as they really are.  Thus, the first three steps of Alcoholics Anonymous focus on admission of the problem and embracing a willingness to receive help from a greater source.  To make a beginning, steps 1 through 3 require looking unabashedly into the effects of compulsive drinking, becoming willing to believe help is available, and learning to ask for help.

Steps 4 through 6 focus on getting to the root causes that lead to alcoholism in the first place.  Alcohol abusers tend to leave a wake of destruction in their paths. Drunkenness leads to inappropriate behavior, emotional outbursts and acting without thought of consequence.  In order to determine who was hurt, the steps suggest making a list of those injured, sharing the list with someone else who can offer insight, and finding a willingness to repair the damage.  This list also identifies specific character defects for ongoing personal work.

Clearing Up the Devastation of Alcohol Abuse

Often, looking squarely at the transgressions that occur during a life of alcohol abuse leaves remorse and guilt.  Steps 7 through 9 focus on setting things right.  Upon identification of character defects like selfishness or thoughtlessness, step 7 recommends prayer for help in overcoming these issues.  Steps 8 and 9 require making a list and making amends to people harmed through alcohol abuse.

A Way of Life

The last three steps focus on adopting a new way of life.  Step 10 asserts that life calls for constant reflection and admission of wrongs.  Step 11 prescribes daily prayer and meditation practice.  Step 12 requires practitioners use all of the principles daily and carry the message to others who are seeking help for alcoholism.

Seven of the 12 steps reference God directly or indirectly.  Some people take exception to treatment of a diagnosed illness with spiritual methodologies.  However, research suggests that patients who participate in 12-step recovery programs are more likely to stay sober for longer periods.  Perhaps, this is simply because everyone can benefit from the actions prescribed in the 12-steps.

Simple Life Lessons from the 12 Steps

Alcoholism is a deadly illness.  Broken marriages, physical abuse, legal troubles and serious emotional turmoil litter the path of an alcohol abuser.  Thus, seeking help is critical.  Learning and adopting these simple lessons from the 12 steps can be helpful for anyone seeking to change destructive patterns:

The Power of “We”

One word is emphasized throughout the 12 steps:  “we”.  Each of the steps is written with an understood “we” pronoun.  For example, step 1 reads, “We admitted we were powerless over alcohol, that our lives had become unmanageable.” The twelve steps are a very personal prescription for recovery from alcoholism and alcohol abuse.  However, personal recovery does not mean venturing forward alone.  Alcoholism can be isolating and lonely.  Working the steps involves walking through the process with other people who have struggled with the same illness.  The power of people working together and helping one another is perhaps the greatest lesson of the 12 steps.

Learning From Celebrities To Survive Addiction

B, D. (2003). The Oxford Group and Alcoholics Anonymous. Welcome to Silkworth.net. Retrieved on December 28, 2016 from: http://silkworth.net/aahistory/oxford_group_connection1.html