AA And The Benjamin Franklin Effect 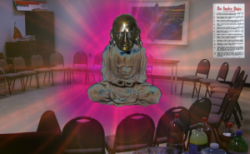 As an alcoholic that can attest that AA works for him, I still have not been able to pinpoint the why.  I just know when I go, I feel better and it helps smooth over the rough patches of my recovery.  People in the rooms tell you “keep coming back”, “it works if you work it”, “Just bring the body. Sooner or later the mind will follow!” and there may be more to that than one thinks.

A recent post on You Are Not So Smart, details in length the phenomenon known as The Benjamin Franklin Effect in which our forefather turned one of his enemies into a good friend by simply requesting to borrow a rare book.  Franklin knew people, and knew this request would turn their opinion around.

“This is another instance of the truth of an old maxim I had learned, which says, ‘He that has once done you a kindness will be more ready to do you another, than he whom you yourself have obliged.’ And it shows how much more profitable it is prudently to remove, than to resent, return, and continue inimical proceedings.” – Benjamin Franklin

For many things, your attitudes came from actions which led to observations which led to explanations which led to beliefs.  It is well known in psychology the cart of behavior often gets before the horse of attitude.  Your actions tend to chisel away at the raw marble of your persona, carving into being the self you experience day-to-day.  It doesn’t feel that way though.  To conscious experience, it feels like you are the one holding the chisel, motivated by existing thoughts and beliefs.  It feels as though the person wearing your pants is performing actions consistent with your established character, yet there is plenty of research suggesting otherwise.  The things you do often create the things you believe.

Impression management theory says you are always thinking about how you appear to others, even when there are no others around.  In the absence of onlookers, deep in your mind, a mirror reflects back that which you have done, and when you see a person who has behaved in a way which could get you booted from your in-group, the anxiety drives you to seek a re-alignment. But, which came first?   Your display or your belief?  As a professional, do you feel compelled to wear a suit, or after donning a suit do you conduct yourself in a professional manner?  Do you vote Democrat because you champion social programs, or do you champion social programs because you voted Democrat?   The research says the latter in both cases.  When you become a member of a group, or the fan of a genre, or the user of a product – those things have more influence on your attitudes than your attitudes have on them, but why?

In my case, I have found this true of AA.  Just by the act of going, I am doing one of the best things I can do to stay sober.  It doesn’t matter whether I am just sitting there in my own world, not paying attention, and not participating …it still does me a world of good.  Of course being attentive and joining in on the discussion would be better – but sometimes, you know, I just don’t have it in me; and I can take comfort in knowing that the BFE is working for me.