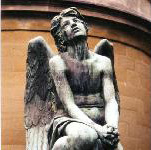 The entire program of Alcoholics Anonymous, and by extension, other 12 step programs, is based on spiritual principles. Addiction in these models may have physical and psychological components, but primarily, help is sought in the spiritual realm.

This doesn’t mean that 12 step spirituality is the only offering – the steps are meant to give practical guidance as well. But the “power” stems from a willingness to, “Let Go and Let God.”

The broad reach of AA comes partly from not being too precise or constrained about the meaning of God. When members talk about a higher power, they are expressing their own personal idea about just what this means. The key point is a willingness to stop relying on their own failed attempts to overcome addiction and recognize the need for help. For those with strong religious convictions, the idea of yielding to an outside authority to help heal is a natural one. Others find it a stumbling block — they are free to adopt any other concept that works for them. The phrase used is, “a God of my own understanding.”

Four of the traditional 12 steps refer to God, either directly or indirectly. This sometimes leads to the misunderstanding that AA is a religious program, rather than a spiritual one. An important difference is the goal from the alcoholic’s point of view. The purpose isn’t one of worship or religious instruction. 12 step spirituality is instead a way to reach people at an emotional level and offer a path toward healing. The only goal is one of repair and progress toward serenity and sobriety.

Unless a group has a religious identification, they will usually stay away from any particular scriptural text and rely on the “bible” of AA – the Big Book. This book doesn’t shy away from mentioning God, but does it by telling the stories of other alcoholics who were freed from the disease.

Alcoholism and other addictions corrupt their victims. The disease ruins lives and produces a feeling of helplessness in the face of overwhelming forces. That’s the reason alcoholics recruit spiritual means of combat. Whether it is prayer directly or just a reliance on the group for support, the struggle cannot be won without this help.