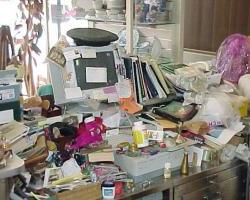 The 12-step program began with Alcoholics Anonymous, and later branched out to drugs, food, even sex addiction. Now with several reality TV shows dedicated to hoarding, there is increased focus on the 12-step program for people trying to recover from being a clutterer or hoarder.

Clutterers Anonymous (CLA) holds meets in two dozen states in the U.S., as well as the United Kingdom, Germany and Iceland.

Its program is much like AA – in fact the first step is the same: “We admitted we were powerless over clutter – that our lives had become unmanageable.”

CLA compares clutter to drugs and alcohol, writing on its web site:

Clutter has been a means of comforting ourselves for not being able to live fully.

According to a report in The Oregonian, Larry attended his first meeting a year ago in Portland, and now he has started a new group closer to his home.

Larry said he realized he had a problem that needed help. He would save, store and keep things he figured he might need or might fix someday.

“I love yard, moving and estate sales,” Larry admitted. “Stopping at an estate sale was a dream come true.”

Larry said work on his problem is still ongoing, and meeting with his fellow hoarders helps.

His number one hint for recovery is, “don’t start with something overwhelming.” He said start cleaning out a shelf or a drawer, because little successes lead to bigger successes.