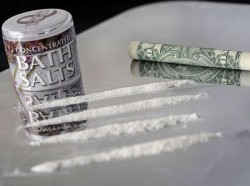 The Director of the Office of National Drug Control Policy issued awarning about the new synthetic stimulants now being clandestinely marketed as bath salts or insecticide.  Admitting that “we lack sufficient data to understand exactly how prevalent the use of these stimulants are,” Drug Czar Gil Kerlikowske nonetheless announced that the marketing of such drugs as mephedrone and MDPV was “both unacceptable and dangerous.”

A growing list of states, now including Michigan, Hawaii, Louisiana, Kentucky, North Dakota, and, recently, Florida, have introduced measures to ban the designer drugs, currently being sold under names like “Ivory Wave” or “Purple Wave.” The United Kingdom has already put mephedrone and related drugs under a blanket ban. The drugs are considered addictive, primarily because they are chemically similar to amphetamine and ephedrine. But users often refer to effects more commonly associated with Ecstasy (MDMA), both the good (euphoria, empathy, talkativeness) and the bad (blood pressure spikes, delusions, drastic changes in body temperature).

“I am deeply concerned  about the distribution, sale, and use of synthetic stimulants-especially those that are marketed as legal substances,” Kerlikowske said. “I ask that parents and other adult influences act immediately to discuss with young people the severe harm that can be caused” by such drugs.

Kerlikowske, who will convene a panel of experts on the subject,  said he was acting in response to recent data from the American Association of Poison Control Centers, which showed that poison control units have received 251 calls related to “bath salts” so far this year, compared to a total of 236 calls in all of calendar year 2010.

An earlier post of mine on mephedrone can be found HERE. Some of the best coverage has come from the anonymous NIH researcher who blogs on science topics as DrugMonkey.  See also coverage of alleged mephedrone deaths by David Kroll HERE.