Here’s Mud In Your Eye… 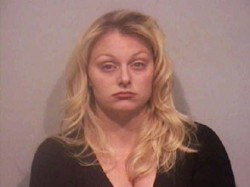 I mean milk in your eye. In a bid to win mother of the year, a Westerville, Ohio woman has been accused by authorities of spraying deputies with her own breast milk while drunk at a wedding reception. Stephanie Robinette, 30, was arrested Saturday, June 25, on five charges after she allegedly hit her husband at the wedding reception and then sprayed breast milk on responding deputies. Robinette’s husband told deputies he and his wife were at the reception when she became drunk and started an argument. Deputies said she then hit her husband twice with a closed fist. That’s when someone called the sheriff’s office.

Robinette began yelling profanities and refused when deputies asked her to get out of the vehicle, Sheriff Walter L. Davis III said. Robinette was sitting in the passenger seat with the door open and told them she was a breast-feeding mother. She then pulled her right breast out of her dress and sprayed deputies and the vehicle with breast milk, according to the sheriff’s report. More deputies responded, and Robinette was pulled from the vehicle and placed under arrest. When bodily fluids are transferred (whether it be urine, saliva or blood), and an officer is involved, it can be considered as an assault. Davis said they need to protect the deputies from communicable diseases. Her attorney told Delaware’s NBC4 she still is employed at a local elementary school where she is a teacher and that there has been an outpouring of support for her. I guess this video of her in an orange jumpsuit (no bail by hubby?) and tearful promise to get help for her substance abuse problems helped milk some sympathy from her peers.