How The Drug War Ended 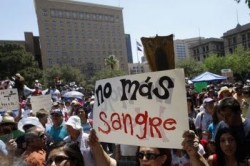 Thoughts on the 40th anniversary of the War on Drugs.

Last week marked the end of four decades of drug wars first unleashed under President Richard Nixon. The event was well marked, with events and pronouncements on all sides. But nothing struck me quite like a recent essay by Daniel Lende at his blog site, Neuroanthropology.

For anthropologist Daniel Lende, the tipping point was a clutch of superb-and superbly horrifying-photographs of drug war victims in Mexico. The old, the young, the innocent. Nothing but blood and death and dying. “Despite years of living in Colombia,” Lende writes, “I’d never really come face-to-face with the costs of the drug war there.” And, up until a few weeks ago, he had been “the good scientist, waiting for more evidence, and the good anthropologist, waiting for something that makes better sense.”

If anything is in short supply in the never-ending, no endpoint, no endgame war, it’s better sense, not bullets. There were the pictures, and there was no way of making those pictures theoretical.  And one photo in particular-a dead grandmother, huddled in a protective embrace meant to shield her two dead grandchildren-finished it off for Lende. “We can’t squirm away, we can’t simply forget or say it’s not so bad. It is that bad. These photos show it.”

It’s all too easy to blame it on drug thugs, so Lende doesn’t bother. Besides, “for too many years, the Mexican government treated drug trafficking like just another corruption, manageable and profitable for those in power. And now the violence has hit as a storm of torture, death, and gruesome display.”

Do we really believe it can’t happen here? U.S. government officials are, as Lende writes, supposedly built from sterner stuff. “Their corruption is not easy money and institutional decay. It’s the sheer rigidity of their approach-an approach of annihilation and denial eerily reminiscent of drug users themselves. It is tyrannical more than puritanical. A war can never be lost, no matter the cost, even if the enemy (demand) comes from our own people.”

Lende is not in favor of legalization-far from it.  “Releasing drugs to the unfettered powers of the capitalist market is not a good option. If they can’t even handle mortgages, what would happen with drugs?” Besides, it’s obvious enough that alcohol, tobacco, and prescription drugs cause enough mayhem as legal drugs.

So, what to do? We can’t go forward, and we can’t go back. Or so it sometimes seems. Lende offers up four suggestions; small ways of making improvements at the margin, where such improvements often start.

—Fairness in drug regulation. Similar drugs should be treated in similar ways. Witness the entanglement the criminal justice system got itself into with huge sentencing disparities between crack cocaine and powdered cocaine; disparities that amounted to racial profiling.

—A focus on consequences rather than simple possession. For example, alcohol is legal, but not drunk driving. “Similar policies that target harmful behaviors users commit are an utter necessity.”

—Mandated restitution and treatment, rather than jail. Lende argues that drug courts can help provide “the long-term protection of the community and the rehabilitation of individuals found to commit acts in counter to commonly established laws.”

—An emphasis on small, immediate costs to drug abusers:“fines for possession, obliging users to show up in court and face social judgment… and one or two day jail sentences are all ways to generate change using a criminal justice approach.”

But is there really any evidence that social interventions of the kind Lende champions can really make a difference? As it happens, yes. Consider smoking. Taxes, warning labels, and social changes in tolerance for smoking have all had a direct effect.