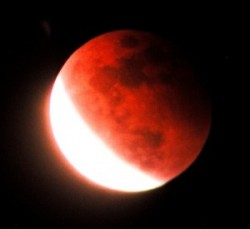 Last year I did a post on the lunar eclipse and tied it in with Deepak Chopra’s synchronicity idea. That eclipse was special in that it gave us the darkest night in over 450 years because it concurred with the winter solstice, the shortest day of the year.

This years will be equally unique, as it will be viewable in my area as the sun rises, giving people in my area a chance at experiencing something that should technically be impossible, one that celestial geometry seems to dictate can’t happen. The little-used name for this effect is a “selenelion” (or “selenehelion”) and occurs when both the sun and the eclipsed moon can be seen at the same time.

How is this possible? When we have a lunar eclipse, the sun, Earth and moon are in a geometrically straight line in space, with the Earth in the middle. So if the sun is above the horizon, the moon must be below the horizon and completely out of sight (or vice versa). And indeed, during a lunar eclipse, the sun and moon are exactly 180 degrees apart in the sky; so in a perfect alignment like this (a “syzygy”) such an observation would seem impossible.

But it is atmospheric refraction that makes a selenelion possible by causing astronomical objects to appear higher in the sky than they are in reality. For example: when you see the sun sitting on the horizon, it is not there really. It’s actually below the edge of the horizon, but our atmosphere acts like a lens and bends the sun’s image just above the horizon, allowing us to see it. This effect actually lengthens the amount of daylight for several minutes or more each day; we end up seeing the sun for a few minutes in the morning before it has actually risen and for a few extra minutes in the evening after it actually already has set. The same holds true with the moon, as well. As a consequence of this atmospheric trick, for many localities there will be an unusual chance to observe a senelion firsthand with Saturday morning’s shadowy event. There will be a short window of roughly 1-to-6 minutes (depending on your location) when you may be able to simultaneously spot the sun rising in the east-southeast and the eclipsed full moon setting in the west-northwest.

My research indicates we here in Alabama should get a chance to see the impossible. All I need is a clear sky and a good vantage point where I can see both the east and west horizons. I have such a place right down the road and the timing is perfect for me on my way to work in the morning. Yeah! So once again I will practice some synchrodestiny and make observations in the rest of my day.

My point – the impossible does happen.

I didn’t seem possible at one point my life, but here I am – sober.