Smoking And The Slave Trade 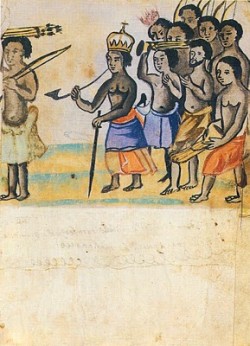 To Africa and back again.

[Queen Nzinga (smoking a pipe) with Her Entourage, Kingdom of Kongo, 1670s]

In the 17th Century, tobacco, the prototypical New World stimulant, was introduced to Africa by European traders. By 1607, tobacco was being cultivated in Sierra Leone, and in 1611 a Swiss doctor commented on how the soldiers of the “Kingdom of Kongo” fought hunger by grinding up tobacco leaves and setting them on fire, “so that a strong smoke is produced, which they inhale.”

It did not take long for the true motivations behind this botanical boon to be revealed. Tobacco served two crucial functions for the slave traders of the Middle Passage: Once Africans had acquired the smoking habit, tobacco could be used in lieu of cash as payment for purchasing slaves. In addition, tobacco was frequently handed out to slaves during the horrific Atlantic voyage. This was not done out of altruism, or common decency, of course. In an article for Slavery and Abolition Journal, Jerome S. Handler writes: “European slavers apparently believed that such measures were useful in their efforts to control their ‘cargo’ and avoid or minimize social unrest and revolts-or even put the enslaved in a better mood prior to their being sold or transshipped from one American port to another.”

How did the slaves smoke the tobacco enroute? With clay pipes supplied by the slave traders. The Europeans had introduced an easily grown, highly addictive plant drug, so it was inevitable that white traders would use that addictive property to their advantage. And they were happy to create an additional market in paraphernalia.

Handler, writing in the African Diaspora Archaeology Network Newsletter, notes that, while Africans produced their own pipes, “white clay pipes of Europeans manufacture, particularly English and Dutch, were commonly used to purchase slaves…. In general it appears that European pipes were often preferred to African ones.” The pipes came in long and short versions, the long “elbow bend” pipes being preferred on shore, with the short pipe being preferred for use onboard. Jean Barbot, an agent for the French Royal African Company, reported that the slaves onboard were occasionally given “short pipes and tobacco to smoak upon deck by turns.”

However humane the practice might sound, the motivations of the traders “were the same as those which prompted them to distribute beads and allow African board games aboard the ships, that is, an attempt to mollify or placate the captives in situations that were always fraught with tension and possibilities of insurrection.” Presumably, it also diminished hunger and helped keep the slaves on their feet during auction in the New World.

Not every ship’s captain went along with the pipes. A French slave ship captain wrote that “for fear of fire, tobacco should be grated and given as a powder.”  Handler, a Senior Scholar at the Virginia Foundation for the Humanities, notes that “there are no data on whether the enslaved were allowed to keep the pipes they received aboard the slave ships. “

Probably not. “Chances are that pipes were collected by the ship’s crew after each use to be re-used at another time,” according to Handler. But it is likely enough that at least some pipes were successfully smuggled ashore. And while most of the white clay pipes found in African descendant archaeological sites in America were probably local in origin, “it may be that an occasional pipe was brought by some enslaved African via the Middle Passage.”

Graphics Credit: Virginia Foundation for the Humanities and the University of Virginia Library,
www.slaveryimages.org.