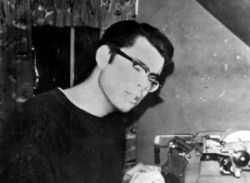 What would you say to your teenage self? That’s the concept behind Dear Me: A Letter to My Sixteen-Year-Old Self. A variety of contributors – from J.K. Rowling (who also wrote the foreword) to James Franco to Garth Brooks– scribbled advice and encouragement to the kids they once were.

Do you think he might have mentioned staying away from a movie project called “Maximum Overdrive”?

Nope – much better advice from the king of horror: