The Strange And Secret Keeley Cure For Addiction 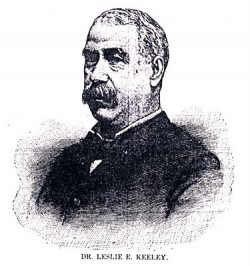 “Drunkenness is a disease and I can cure it.”

In America in the late 1800s, curing alcoholism was a serious business-and for Dr. Leslie Keeley, a very lucrative one. Dozens of clinics and cures already existed, and some treatment centers had even experimented with franchising. For the late 19th Century alcoholic in search of treatment, what most of them had on offer was either outright patent medicine fraud, or else well intentioned if ultimately misguided “opium” cures. None of them, writes William L. White in Slaying the Dragon, “was more famous, more geographically dispersed, more widely utilized, and more controversial than Leslie Keeley’s Double Chloride of Gold Cure for the treatment of alcoholism, drug addiction, and the tobacco habit.”

The Irish-born Dr. Keeley served as a surgeon in the Civil War, and, as family lore would have it, started a treatment program for alcoholism in a Union hospital during the war. We do know that in 1879, he opened the first Keeley Institute in Dwight, Illinois, south of Chicago. His sales pitches were colorful and varied, but boiled down to this pledge: “Drunkenness is a disease and I can cure it.” He could cure it with a secret, specific formula, injected four times daily, about which all he would hint publically was that it contained, as one of its ingredients, gold. This was not so outlandish as it may seem. Gold, silver, strychnine, and other potentially poisonous ingredients were already employed in dozens of standard medicines-and, in many cases, still are. But everything else about Dr. Keeley’s magic elixir was as secret as the ingredients in Coke.

Nonetheless, something seemed to be working. He claimed an outlandish 95% success rate, bolstered by legions of enthusiastic followers who formed proto-AA groups with the catchy title of Bi-Chloride of Gold Clubs, better known as the Keeley Leagues. And Keeley himself employed the largest collection of formerly addicted doctors in the known world. There were no counselors at Keeley clinics. There were enough doctors on staff to go around, even though an estimated total of half a million alcoholics and other addicts eventually took the Keeley Cure.

Treatment consisted of the infamous injections, a liquid cordial every two hours, and, according to White, the following modalities: “daily rest, nutrition, mutual sharing, and alternative diversions worked to improve the patient’s physical and psychological health.” We can assume, from this regimen, that some alcoholics and addicts probably improved, regardless of what was in the medicine. And there was the frequent suggestion that, really, it was probably best not to ask too many questions about what was in the medicine, anyway.

“The atmosphere was informal and friendly at the clinics,” White writes, “with a marked absence of the bars and restraints that were typical in most inebriate asylums of the period.” There were, of course, some very vocal detractors. Dr. T. D. Crothers, a leader in the inebriate asylum movement, said: “There is no gold cure for inebriety. There are no facts to show that gold has any value in this disease. All the assertions and statements concerning gold as a remedy are delusions, and will not bear the test of critical examination.”  Perhaps not. But success was success, and soon, the marketplace saw the introduction of Dr. Haines Golden Remedy, the Geneva Gold Cure, the Boston Bichloride of Gold Company, and many other knockoffs. (Keeley proclaimed that his Double Chloride of Gold cured all forms of inebriety by “speeding up the restoration of poisoned cells to their pre-poisoned condition.”)

From 1892 through 1900, the Keeley Company pulled in almost $3 million, including mail-order business. There was a Keeley Day at the 1893 World’s Fair in Chicago. Here is an excerpt from the pamphlet, “To the Keeley Graduate,” given to every patient who completed treatment:

You are now numbered among thousands of men and women who have broken the shackles of alcohol and drug addictions by the Keeley method of treatment. Your cure will be as permanent as your life, you will never have any craving for alcohol or other sedative drugs as long as you live, unless you create it by returning to their use, thus re-poisoning your nerve cells.

But by 1900, the bloom was off the Keeley miracle, as insiders fought for financial control, and congressional investigators looked into the affairs of Keeley League president Andrew J. Smith.

Of course, if Keeley had really possessed a specific, replicable formula that took away the craving for alcohol, it would have been monstrously unethical to hold it a secret. And he was constantly accused of using harmful ingredients, such as codeine, strychnine, and cocaine in his magic injections.

Keeley wouldn’t say. And neither did any of his heirs or business partners. The only thing most court records agree on is that the injection didn’t contain any gold-too many possible side effects. According to the testimony of Keeley’s original business partner, “The only patient who ever received Keeley medicine that actually had gold in it almost died.”

The secret ingredient was probably atropine-a powerful compound belonging to a very weird family of plant drugs known collectively as“anticholinergenic deliriants.” Atropine is the active ingredient in Belladonna, aka Deadly Nightshade. Along with mandrake, henbane, and jimsonweed, the so-called Belladonna alkaloids are among the primary hallucinatory ingredients found in many a witch’s and sorcerer’s brew throughout the ages.Belladonna can cause terrifying hallucinations, feelings of flight or paralysis, blurred vision, impaired motor control, and other side effects usually experienced as highly unpleasant. It was likely Belladonna, not LSD, that served as the basic rocket fuel for the Manson’s family’s horrific activities, according to some accounts. More mundanely, atropine is familiar to armed forces personnel in the form of a self-injection device for serious wounds. Atropine has the ability to speed up a slowing or overworked heart. In ancient times, it was used as an anesthetic for surgery. Atropine is also a poison. (Scopolamine, used medically for motion sickness, is another.)

But one person’s unpleasant side effect is another’s chemical cure. Did the Keeley concoction just terrify the bejesus out of addicts, as some sort of ad hoc version of aversive therapy, or did it sedate his patients into a semi-catatonic, immobile haze, in which they could pass 3 weeks of detox in relative comfort, or at least immobility and minimal disruption?Probably both, depending on drug dosage, drug combination, and patient metabolism. There were widespread reports of Keeley patients who allegedly died or went insane.

“The pulp image of Dr. Leslie Keeley-that of the country physician who had stumbled onto a revolutionary cure for the inebriety problem that had stumped the best medical scientists,” was key to his success, White believes. “Keeley introduced an approach that carried an aura of scientific truth and all the emotional support and intensity of a revival meeting.”

“The likely ingredients of the Double Chloride of Gold remedy and tonics-alcohol, atropine, strychnia, apomorphine -did aid detoxification,” White concludes. And the graduation pamphlet went on to emphasize the importance of “sustaining the new Keeley habits: regular patterns of sleep, regular and balanced meals, regular consumption of water, abstinence from tobacco and caffeinated drinks, healthy recreation, and care in the selection of personal associates.”

If you skip the atropine injections, that series of admonitions remains the bedrock of drug and alcohol treatment programs everywhere.