The Undiagnosed Epidemic Of Incarceration 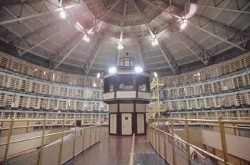 Prison once again a place for addicts and the mentally ill.

Readers may remember the dark day of January 1, 2008, when the U.S. set an all-time record: One out of every 100 adults was behind bars. That’s more than 2.3 million people. That’s 25% of all the prisoners in the world-and the world includes some very nasty nations. What gives?

You know the answer: drug crimes. Can it really be a coincidence that over the past 40 years, ever since President Richard Nixon first declared war on drugs, the number of people housed in U.S. prisons has gone up by more than 600%? Are we really just that much more vicious and larcenous than we used to be? 600% more unlawful than we were as a people in 1971? Last month, a group of medical professionals from the Division of Infectious Diseases at Brown Medical School, and the Center for Prisoner Health and Human Rights, both in Providence, Rhode Island, co-authored an article for the New England Journal of Medicine entitled “Medicine and the Epidemic of Incarceration in the United States.” The investigators conclude that the explosion in the prison population is a direct result of “our country’s failure to treat addiction and mental illness as medical conditions. The natural history of these diseases often leads to behaviors that result in incarceration.” Packed prisons are also the result of a broader movement over the past 40 years to shift the burden of care for addiction and mental illness over to the prison system. “Deinstitutionalization of the mentally ill over the past 50 years and severe punishment for drug users starting in the 1970s have shifted the burden of care for addiction and mental illness to jails and prisons,” the authors argue.

Do the social costs of this massive transfer of addicts and the mentally ill to the U.S. prison system outweigh the benefits? According to the NEJM article by Josiah D. Rich and co-workers, “more than 50% of inmates meet the DSM-IV criteria for drug dependence or abuse, and 20% of state prisoners have a history of injection-drug use.” Rich estimates that up to a third of all heroin users pass through the criminal justice system each year. These figures are shockingly high, compared to the general population, even allowing for a higher level of drug use among the criminal population.

“The largest facilities housing psychiatric patients in the United States are not hospitals but jails,” they write. “More than half of inmates have symptoms of a psychiatric disorder… yet correctional facilities are fundamentally designed to confine and punish, not to treat disease.” Furthermore, as most people are aware, the punishment is not meted out equally: “By middle age, black men in the United State are more likely to have spent time in prison than to have graduated from college or joined the military and they are far more likely than whites to be sent to prison for drug offenses despite being no more likely that whites to use drugs.”

And there is one aspect of the sorry situation that receives almost no attention at all: Most prisoners are eventually released. This post-release period, says the NEJM article, “presents extraordinary risks to individuals and costs to society.” In the first two weeks after release, former inmates are 129 times more likely to die from a drug overdose than the average man or woman on the street. They are 12 times more likely to die, period. And here’s a nice touch: Most of them don’t have Medicaid or other medical insurance, and there is usually no primary care follow-up to assure that they have access to affordable medications, if they need them. Inevitably, these are among the people who make the local emergency room their primary care facility, at great cost to everyone involved.  As the article states: “Addressing the health needs of this vulnerable population is thus not only an ethical imperative, but also of crucial importance from both a fiscal and a public health perspective.”

State spending on correctional institutes is now the second fastest growing sector of government spending, after Medicaid. According to the authors, five states now spend more on prisons than they spend on higher education.“Locking up millions of people for drug-related crimes has failed as a public-safety strategy and has harmed public health in the communities to which these men and women return.”

The authors make it clear that, for addicts, drug and mental health treatment programs are humane and sensible alternatives to incarceration. They are also cost-effective: In Rhode Island, for example, the price for putting someone behind bars for a year is $41,000-or $110,000, if we are talking about the new super maximum-security facilities. Why haven’t politicians seized on all of this as a budgeting issue; as a cost-effective way to address drug and alcohol addiction without clogging up the criminal justice system, and creating embarrassing rates of incarceration? The authors have an answer: the fear of being tagged as “soft on crime.” If addiction is a craven failure of will power leading to the violation of social norms, as so many citizens seem to think, than prison is where addicts belong. The result: political pandering on the drug issue, by politicians suffering from a craven failure of will.

Here is where President Obama’s Affordable Care Act could really end up making a difference. Former prisoners will have a good shot at health coverage, and a policy that links together community health centers and academic medical centers could radically improve care during the critical post-release period. As Rich and colleagues argue: “Such access could redirect many people with serious illnesses away from the revolving door of the criminal justice system, thereby improving overall public health in the communities to which prisoners return and decreasing the costs associated with reincarceration due to untreated addiction and mental illness.”