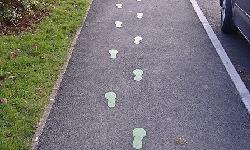 Alcoholics Anonymous is almost always voluntary (it can be court ordered for some set period). Members do drift in and out, even though alcoholism is thought to be a lifelong condition. So why do they leave?

First, the fact is that the vast majority who attend AA will leave, as many as 95% won’t make it the first year. This statistic is from an old AA report, the 1989 Triennial Membership Survey. The figure is not without controversy, but no one disputes that the majority of newcomers leave. What isn’t known is exactly why they do so.

There is an AA lore about people who quit attending. Phrases like, “wants to return to drinking,” “constitutionally incapable,” or “some are sicker than others” are heard. It may be as simple as not being able to attain the first step: a recognition they are powerless over alcohol. When someone doesn’t return, you can’t exactly ask them. However, groups that offer an alternative to AA do accept ex-AA members and some stories are posted online.

One should take the “I hate AA” stories with a grain of salt. There’s a known bias where those who support something and those that are passionate in the opposite direction will have the loudest voices. It is likely there is a large middle that doesn’t comment either way. A particular group can be toxic or some may find the steps themselves repellent. Others were forced to attend (by a court or significant other) and leave when the heat is off.

Motivation counts for a great deal, as do expectations. Because treatment programs as a whole have a high dropout rate, one can assume that some people quit drinking and find they simply don’t like sobriety much. The promises of a better life without alcohol don’t come or they don’t find the support they need.

Take any story with some doubt. With that in mind, I’ll tell you why I no longer attend AA or NA. I got what I could and found that there was no more for me at meetings.

After about a year of attending I felt I had heard all the stories and enough advice to last a lifetime. The meetings became the only time during the week when I even thought about using, and I didn’t think I was helping anyone there. I had my own ideas about addiction and how to deal with it that were somewhat controversial (more biology and less spirituality) and my opinions didn’t line up well with AA dogma.

They got me started in the right direction – I’m thankful. I’ve been clean and sober for more than a decade. I think AA is a valuable institution. I also think it was a club where I didn’t fit. That’s all. No fights, no passion, just a slow realization that I didn’t belong.

Until now, my story wasn’t online. After all, it lacks drama.