Are there Non Religious AA Meetings?

Yes, there are non-religious AA meetings. Although it is a commonly held belief that AA is a religious based organization, it does not have to be. 12 step, AA meetings are often modified for those who do not want a religious form of treatment. The popular criticism of AA being strictly religions is untrue.

What are Non Religious AA Meetings?

The simple answer to what are non-religious AA meetings is, they are AA meetings that do not involve the spiritual or religious components that usually are a part of AA. According to the Alcoholics Anonymous History, it was founded by the Oxford Group, which was a Christian group. This is where the focus on a higher power started.

Since then prayers and other religious notes have been added by various members and groups. AA has always been an organization where independent groups can come up with their own way of dealing with individual addictions.

Many still consider it AA as long as they adhere to the 12 steps and 12 principals regardless of what you call their higher power. To find a nonreligious AA type of treatment or a treatment center to help with your alcoholism, call ​888-905-9004 (Who Answers?) .

Who are Non-religious AA Meetings for? 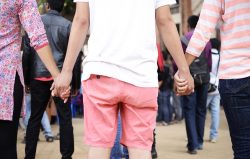 Non religious AA meetings work well for atheists or those who are spiritual but not religious.

According to the New York Times, non-religious AA meetings are for those who:

This is only a small selection of people who prefer their alcohol addiction treatment non-religious. Some people are just not comfortable with religious beliefs and prayer.

Many people who attend frequent meetings will attend both religious and nonreligious meetings because they need more meetings than one type alone provides. Part of the AA philosophy is that anyone who wants to stop drinking may attend any meeting. AA meetings are traditionally nonjudgmental whether religion is involved or not.

What is Different in AA Meetings that Do Not Involve Religion?

It is not surprising that nonreligious Alcoholics Anonymous meetings are not much different than traditional meetings. They both:

These differences are what makes those that are not religious comfortable in nonreligious AA meetings.

How do you Find an AA Meeting that Does Not Involve Religion?

How Can You Submit to a Higher Power If You Are Not Religious?