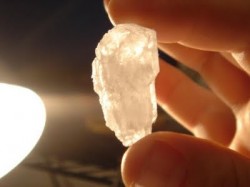 We know from the work of Nora Volkow and others that meth abusers have chronically low levels of dopamine D2 receptors in their brains. But what is going on in the rest of the body when methamphetamine addiction is running full force? A study of meth-crazed fruit flies, just published at PLoS ONE by researchers at the University of Illinois, Purdue, and elsewhere, took a whole-body approach, tracing the meth-induced cascade of chemical reactions wherever they found it. Most drug research in animal models concentrates on changes in the brain. But this study was looking elsewhere, for changes caused by meth and evidenced along common metabolic pathways. They found that meth exposure had striking effects on insect molecular pathways associated with “energy generation, sugar metabolism, sperm cell formation, cell structure, hormones, skeletal muscle and cardiac muscles.” In other words-and no secret here-speed impacts aging, sexual behavior and cardiovascular health. But how, exactly?

The administration of methamphetamine to Drosophilia melanogaster-a fruit fly with one of the most studies genotypes in history-causes changes in the way certain genes and proteins are expressed. Some of the changes might hold for human users, as well:

— Meth inhibits something called ETC-the mitochondrial electron transport chain. This causes changes in proteins and reduced enzyme activity that, among other things, has been known to make bees more aggressive.

— “METH impacts pathways associated with hypoxia and/or the Warburg effect, pathways in which cellular energy is predominantly produced by glycolysis rather than by oxidative respiration.” Short version: The Warburg effect is associated with the aberrant energy metabolism characteristic of cancer cells. This certainly doesn’t mean we can conclude that speed causes cancer, but it is one more piece of evidence confirming the notion that methamphetamine’s range of potentially damaging side effects is simply too high to justify. We can argue the merits of legalizing marijuana, but no one who studies meth seriously has ever suggested legalization of this pernicious substance.

Professor Barry Pittendrigh of the University of Illinois, a member of the study team, said: “One could almost call meth a perfect storm toxin because it does so much damage to so many different tissues in the body.”