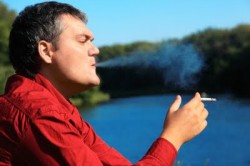 (With love and apologies to Martha and the Vandellas.)

That wonderful song goes on to declare:

‘Cause I know
You’re no good for me
But you’ve become
A part of me.

The song is not about cigarette addiction, but it could be. Full Disclosure: I smoked cigarettes myself for almost 25 years. And then, after several failed attempts, I quit. I out myself on this subject because a paper from the May 25 issue of the New England Journal of Medicine (NEJM) decries what the authors call the “denormalization” of smoking-and I find myself agreeing with them, smokeless though I may be. I recently visited New York, coincidentally on the day that smoking outdoors in New York City became illegal. Okay, that’s not quite fair to say-it became illegal to smoke in Central Park, or at Brighton Beach, or along the newly pedestrian mallways of Times Square. There is no smoking along the High Line. There is no smoking at any park, beach, or pedestrian mall. As both the tobacco industry and anti-smoking activists well know, this was an iconic victory that has the potential to change smoking laws in virtually every other American city.

It’s a fascinating progression, starting in the 70s when the Civil Aeronautics Board decreed non-smoking sections on domestic airline flights, to the recent New York City Council Decision to ban smoking en plein air, so to speak. Thomas Farley, New York City Health Commissioner, summed it up as follows in a public hearing: “I think in the future, we will look back on this time and say ‘How could we have ever tolerated smoking in a park?’”

I’m not so sure on that, myself. James Colgrove, Ronald Bayer, and Kathleen Bachynski of the Mailman School of Public Health at Columbia University wrote the paper, entitled “Nowhere Left to Hide? The Banishment of Smoking from Public Spaces,” in the NEJM. The authors note that more than 500 towns and cities in 43 different states have already enacted laws banning smoking “in outdoor recreation areas.” At first, as the authors summarize the history, it all seems like a sensible compromise, built on common courtesy. First airplanes and buses, then restaurants and bars, began setting aside seats for non-smokers. By the early 90s, the first data on secondhand smoke was rolling in. Schools, convention centers, and finally even private workplaces either banned smoking or created smoke-free areas. But even then, the primary motivator, according to the researchers, was that secondhand smoke was “unpleasant and annoying,” not deadly. Smokers weren’t being asked to refrain from public smoking for the good of their own health, but as a courtesy to others.

The solid scientific evidence kept accumulating, however-even though tobacco cigarettes were, and still are, completely legal products for adult Americans to purchase and consume if they so choose. Now the arguments shifted to the innocent bystanders, those within the six-foot ring, the immediate smoke zone surrounding a smoker, and the elevated risk of lung cancer, heart disease, and asthma that smokers were subjecting them to. In 1993, the Environmental Protection Agency (EPA) classified secondhand smoke as a Class A carcinogen, and more school, stadiums and offices proscribed smoking.

So far so good, really, from a public health standpoint. But now comes the bend in the road. Suddenly, parks and beaches were being added to the no-smoking roster. “As the zones of prohibition are extended from indoor to outdoor spaces, however, the evidence of physical harm to bystanders grows more tenuous.” In 2008, the authors report, “The editor of the journal Tobacco Control dismissed as ‘flimsy’ the evidence that secondhand smoke poses a threat to the health of nonsmokers in most outdoor settings.”

This confusion was much in evidence at public hearings last fall on the proposed outdoor smoking bans. While Health commissioner Farley argued that 57% of New Yorkers showed nicotine by-products in their blood, he also argued that exposing young children to adults in the carnal act of smoking was detrimental to the public health and welfare. “Families,” he said, “should be able to bring their children to parks and beaches knowing that they won’t see others smoking.” This is really quite an astonishing assertion, given the range of bad habits youngsters are exposed to as they go about a normal day in the adult world. The authors are particularly concerned about this push to stigmatize smokers. “Given the addictive nature of nicotine and the difficultly of quitting smoking, strategies of denormalization raise both pragmatic and ethical concerns.” Furthermore:

The decline in U.S. smoking rates since the 1960s has coincided with the development of a sharp gradient along the lines of socioeconomic status. Whereas about one fifth of all Americans are smokers, about one third of those with incomes below the federal poverty level smoke. These data are especially pertinent to the question of bans in parks. Since smokers are more likely to be poor and therefore dependent on free public spaces for enjoyment and recreation, refusing to allow them to smoke in those places poses potential problems of fairness.

The anti-tobacco movement, frustrated by the slow pace of gains over several years of active efforts, with rates of smoking remaining essentially unchanged, has to face the fact that an outright ban on cigarettes is a ticket to black market, crime syndicate hell. But a de facto ban is something altogether different, and “steadily winnowing the spaces in which smoking is legally allowed may be leading to a kind of de facto prohibition.” More and more employers prohibit smoking in doorways, within ten feet of doorways, anywhere on university campuses, and so on. No one has voted to make cigarette smoking illegal. But the public space in which this legal activity can be pursued is disappearing. And here is where the tough questions start: “In the absence of direct health risks to others, bans on smoking in parks and beaches raise questions about the acceptable limits for government to impose on conduct,” the authors conclude. Not to mention issues of personal autonomy, individual choice, and the stigma attached to addictive behavior. Perhaps the ACLU will soon take an interest in the civil rights of outdoor smokers, where the only health being hazarded is the smokers’ own.