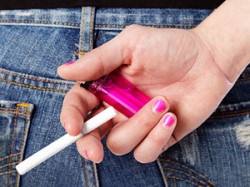 Call it “nicolescence.” It’s that time of life when certain 18-and-unders discover cigarettes. Most adult smokers begin their habit before the age of 19, and a majority of adolescents have tried cigarettes at least once. But for some of them-those who were “born to smoke,” in a sense-early exposure to nicotine may influence adolescent cognitive performance in ways that adult exposure to nicotine does not. Furthermore, early exposure may result in “cognitive impairments in later life.”

These provocative notions are raised by a group of researchers at VU University, Amsterdam, The Netherlands, in a paper for Nature Neuroscience. And while the specifics of glutamate activity they have documented are fascinating, the leaps back and forth between adolescent humans and adolescent lab mice are dizzying. Nonetheless, the bold claims made in the paper prompted the scientists “to reconsider our views on the etiology of attention deficits.”

That may be more than many addiction researchers are willing to countenance, but the study makes an intriguing case for long-term effects on attentional processing. The Dutch researchers exposed adolescent rats to nicotine, assessed visuospatial attention and other markers associated with synaptic activity in the prefrontal cortex, and found impaired measures of attention and signs of increased impulsivity in adulthood after five weeks of abstinence. Adult rats exposed to nicotine for the first time did not show similar long-term consequences.

The molecular underpinnings for this phenomenon appear to be reduced glutamate receptor protein levels in the prefrontal cortex. Glutamate is a neurotransmitter involved in attention, among other cortical tasks.Glutamate levels were “altered specifically by adolescent and not adult nicotine exposure” in the lab animals, the researchers found.

The glutamate receptor mGluR2 is the likely culprit.  The researchers report that “a lasting downregulation of mGluR2 on presynaptic terminals of glutamatergic synapses in the prefrontal cortex persists into adulthood causing disturbances in attention…. Restoring mGluR2 activity in vivo in the prefrontal cortex of adult rats exposed to nicotine during adolescence remediated the attention deficit.”

The study concludes: “Not only from a behavioral, but also from a molecular point of view, the adolescent brain is more susceptible to consequences of nicotinic receptor activation.” In other words, there is at least some evidence that the neurotoxic effects of nicotine are potentially more severe in the early developmental stage called adolescence.

The Dutch study is not the only one of its kind. In 2005, Biological Psychiatrypublished a report on cognition in which adolescent smokers “were found to have impairments in accuracy of working memory performance irrespective of recency of smoking. Performance decrements were more severe with earlier age of onset of smoking.”

And a 2007 study published inNeuropsychopharmocology, based on testing and fMRI scans of 181 male and female adolescent smokers, concluded that “in humans, prenatal and adolescent exposure to nicotine exerts gender-specific deleterious effects on auditory and visual attention…” Boys were more sensitive than girls to attention deficits involving auditory processing, while girls tended to show equal deficits in both auditory and visual attention tasks.