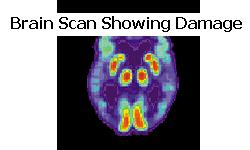 Alcohol, like many substances, is toxic above a certain level of intake. And while acute alcohol poisoning sends many to the hospital (or morgue) every year, at lower doses the effects aren’t quite as dramatic. We know, over time, alcohol abuse syndromes lead to cognitive impairment, and this isn’t surprising considering that alcohol is neurotoxic when consumed regularly in enough quantity to get drunk. The question researches are wrestling with is whether or not there is a completely safe level of consumption – or even an amount of alcohol use that is beneficial.

One area of particular concern is how drinking styles over many years can affect the rate of Alzheimer’s disease later in life. This question has been gaining attention as the US population continues to age. Since the brain doesn’t regenerate tissue, the suspicion is that any damaging effects will be cumulative and should show up statistically. Even more importantly, while heavy alcohol use is known to increase the risk for dementia, is there a protective effect when consumption rates are lower?

To help answer this question, a meta-study and review was undertaken and published in Psychiatry Investigations (commentary here). The evidence seems to suggest that there is a protective effect when alcohol is consumed in light to moderate amounts. In fact, there seems to be a lowering of the risk of Alzheimer’s by 35 to 40% over those who drink no alcohol at all.

A meta study uses data from many single studies to draw conclusions that might not be apparent in any single one. Unfortunately, while this effect is supported by the data, the picture is too general to allow specific recommendations. That’s what the medical community would dearly like – proof that we can lower risk by prescribing a few alcoholic beverages a week to someone with other risk factors.

With further research and more details to come, there may arrive a day when a doctor advises, along with a healthy diet and exercise, a couple of beers a week.