“Golden Voice” A Year Sober And Loving It 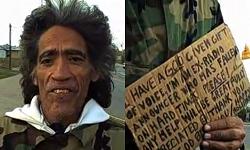 You may remember the story – a washed up, homeless DJ who got a second chance when a video of him went viral. A reporter filmed a short clip of Ted Williams holding a “Please Help” style cardboard sign. But when the reporter heard him speak, he suspected there was more to the story, and Ted Williams, with an extremely mellow and memorable voice was rescued from obscurity and the street because of the attention.

Since then, he’s had some back sliding – trading alcohol addiction for the crack that plagued him and ruined his first shot at a career in radio. Now, a year of sobriety under his belt, Mr. Williams speaks candidly about his addiction and trying to recapture his dreams in his later years. In an interview with MSNBC he talks about quitting rehab and trying to replace his crack habit with alcohol – not a good choice.

Williams said, “All through that journey, I never stopped praying. I never lost hope. I would ask God, ‘Please, let my mother and myself stay alive one more year. Lord, please, let a life-changing turnaround happen in my life so that my mother would not close her eyes saying, ‘I did a bad job raising this child.’’’

His particular rock bottom turned into 17 years on the streets. This changed last January with public interest in the “lost DJ” with the beautiful voice. He did a series of interviews and an intervention with Dr. Phil. Then came two weeks of rehab and his switch from crack to alcohol. Now, with the marriage of his daughter this month (an event he was able to participate in), Mr. Williams can claim a year of clean living.

It’s certainly a cautionary tale. From the number one drive-time radio jock in Columbus, Ohio to the streets – all by way of cocaine addiction. The reason we celebrate isn’t just for this one person though, it’s the idea that there is hope for the hundreds (if not thousands) more who haven’t yet escaped the trap he was in.