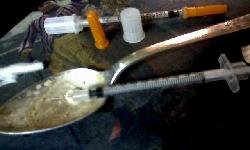 A disturbing article in the Miami Herald tells the sad tale of what can happen when drug enforcement is focused on one problem and addicts shift to another source of supply. Florida was once known as a state with very loose regulations on pain clinics. So loose that some were labeled “pill mills,” mere storefront operations where doctors were hired to write prescriptions for almost anyone who walked in the door. And those prescriptions were inevitably for strong narcotics.

It got to the point that Florida was supplying the needs of addicts in other states where laws were more stringent. However, state legislators clamped down and instituted new laws on prescription drug tracking. Several major operations where shut down and both owners and the doctors involved were arrested.

Left without an easy supply, addicts have now turned to street narcotics and heroin in particular, to meet their “needs.” At $10 a “hit,” heroin offers a bigger bang for the buck, but naïve users, unfamiliar with the heavy-duty opiate, can easily overdose and even die.

Heroin deaths are up by almost 20% since the stricter laws went into effect, but fatalities are still fairly rare at 62 statewide in 2011. This after a strong decline since the beginning of 2000, the last time heroin was truly a scourge in Florida.

A quote from the story tells the sad tale:

“When I ask my patients, they say, ‘Yeah, I couldn’t get oxycodone, and now I’m using heroin, four or five bags,’ ” said Dr. Patricia Junquera, a University of Miami assistant professor of psychiatry and a doctor at Jackson Memorial Hospital’s detox unit. “I think more people are switching to heroin.”

No one is saying there’s a one-to-one switch from prescription drugs to heroin, but some is definitely happening. Oxycontin, Vicodin and other popular prescription narcotics are still available on the black market but prices have risen substantially, up 200% since 2011. The worst hit are the traditional areas where heroin thrives – the big cities. Miami and Orlando in particular. Heroin is also more popular among transients and some become homeless because of the drug. Florida’s year-round warm weather makes it somewhat easier for outdoor living.