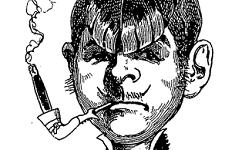 What do you do with a product that is addictive and the use of which can be harmful to the public? Well, we generally make it a prescription only item. That way, a medical professional has to be involved in the supply chain. And that’s the logic behind legislation introduced in Oregon to make cigarettes a Schedule III drug. Not cigarettes specifically, but all sources of nicotine, the addictive ingredient.

The bill, proposed by Portland’s Representative Mitch Greenlick, would classify nicotine in the same category as Tylenol with codeine and Vicodin. Those caught using nicotine products (primarily smokers) would face a $6,250 fine and possibly a year in prison.

According to The Blaze, although Oregon has seen a dramatic fall in cigarette sales over the last two decades (down 48 percent), tobacco products are still responsible for 7,000 deaths in the state, if not directly, as a contributing factor. The smoking rate in our state is less than the national average, but smokers still shell out more than a thousand dollars a year, on average, to support their addiction.

Interestingly, when they were first marketed, nicotine replacement therapies were prescription items but manufacturers were able to get approval from the FDA to sell patches and gums over the counter. These stop smoking items would also fall under the proposed law and would have to go back on prescription status.

It’s an odd irony that just as marijuana looks to become legal for adults at the next opportunity voters have to weigh in at the polls, cigarettes may go the other way in a kind of strange flip flop. One addictive substance being seen now as more harmful while the other is seen as less so.

Critics say that current restrictions on smoking are enough and criminalizing tobacco wouldn’t work. Rather, they predict tax revenue loss and smuggling in from neighboring states.