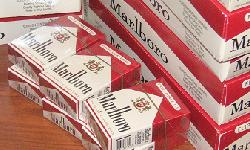 It’s no secret that US consumers buy Chinese products by the bargeload. Whether it’s clothing or electronics, American shoppers can’t resist the savings from overseas manufacturing. When this is combined with smuggle to avoid paying taxes, it represents a powerful combination – very cheap but with a great profit margin.

Cigarrette smuggling was in the news from the United States Attorney’s Office after a Chinese national, Xiao Wei, was caught smuggling a 20-foot cargo container full of counterfeit smokes. The cigarettes were printed to mimic Marlboros and were on their way to Rhode Island, a state where a single pack can retail for $8 or more. Wei also bragged to undercover operators about previous shipments of counterfeit pharmaceuticals and leather goods.

Cigarette addiction has a few nuances that make it economically attractive to smugglers. The product is extremely cheap to make, legal until it is misbranded, and addicts require a steady, trickling supply. The average smoker needs another “hit” about every twenty minutes or so. As a household budget item, especially in states that impose high taxes on cigarettes, keeping the addiction fueled is a major cost. Not so much that tobacco addicts are out burglarizing their neighbors, but enough that they will quickly buy whenever a deal is offered.

Perhaps the major attraction for smugglers, in contrast with most illegal drugs, is the way the courts handle these cases. Unlike a heroin or cocaine smuggler, who might face life in prison, Mr. Wei faces a maximum of three years in prison and a $10,000 fine.

The high price differential between retail prices and cost-to-import/smuggle is at least partially driven by taxes, but cigarettes are a good target for increased taxation. There’s a well established social engineering relationship – raise the price and lower the number of smokers. By increasing taxes, legislators accomplish the twin benefits of raising revenue and lowering smoking rates in their state.