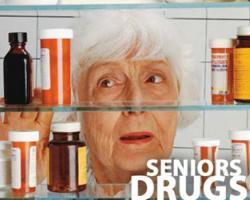 The number of seniors in the United States seeking treatment for drug or alcohol treatment is skyrocketing, and it is only projected to get worse.

According to a report from theAssociated Press, between 1992 and 2008 treatment admissions for people 50 and older more than doubled. Here are the raw numbers — 231,200 people sought treatment in 2008, up from 102,700 in 1992, according to the federal Substance Abuse and Mental Health Services Administration (SAMHSA).

This is happening while the number of younger people seeking treatment has gone down.

Much of this is attributed to baby boomers. Experts say boomers have a higher rate of substance abuse than other generations — abuse that may have started decades ago and is only coming to a head now.

And as baby boomers age, the numbers will go up even more.

“The baby boom population has some experience with substance misuse and is more comfortable with these substances,” said Dr. Westley Clark, director of SAMHSA’s center on substance abuse treatment.

Health officials say many of today’s treatment facilities do not have programs to deal specifically with seniors. That will have to change.

So too will the perception that kindly old grandpa cannot also be addicted to drugs or alcohol.